This story or parts thereof may not be reproduced in any form, stored in a retrieval system, or transmitted in any form by any means – electronic, mechanical, photocopy, recording or otherwise – without prior written permission of the author, except as provided by United States of America copyright law.

Star Wars characters, planets and vehicles are protected trademarks of Disney and Lucasfilm.

The short-limbed furry biped yelled out as he rounded the corner narrowly smacking into Kal Orn as he passed.

Up ahead and closing in fast were three of the Empire’s newly armored Stormtroopers with blasters blazing as they chased the little creature through the dingy depths of Coruscant. Not in a mood for unwanted attention, Kal instinctively grabbed the three soldiers through the Force and hurled them backwards through the air.

A blaster bolt narrowly missed his head from behind and he turned to grab the throat of an approaching trooper, violently yanking him forward through the air before slamming him into the concrete at his feet.

As the trooper lay motionless in the alley, Kal ducked into a narrow walkway and was met by a small Ewok standing there adjusting a universal translator that was attached to both his ear and throat. In his free hand he held a lightsaber hilt.

“Is that why they’re chasing you?” Kal asked the Ewok as he motioned to the lightsaber.

“Chak, chak,” The Ewok said as he fiddled with the translator as it fired up. “I mean… yes. Still getting used to this translator.”

Without warning, Kal called the lightsaber to his hand pulling it from the Ewok’s grip and ignited it. He admired the bright orange blade and craftsmanship of the dull gray hilt.

“Now tell me how you really got it.”

Before the Ewok could answer, the Cypharian sensed something was wrong and looked up to see dozens of Stormtroopers moving into position on the rooftops just above him. Before they could draw their blasters, he pocketed the hilt and flung his hands into the air unleashing Force lightning from his fingertips, scorching the buildings on either side of him as the electric bolts made their way to their intended targets.

Several troopers caught in the Force storm began to sizzle inside their armor as the lightning hit a power cell on one of the roofs causing an explosion overhead, causing many soldiers to sail over the side of the building to the alley below.

As the smoke cleared and the charred exteriors of the buildings began to crumble down on top of the fallen Stormtroopers, Kal looked at his hands in awe. How was he doing this?

“It’s a strange and beautiful power isn’t it?” A voice asked.

Kal looked up to see a dark cloaked man approach through the smoke and dust. His eyes were as yellow as the Cypharian sun.

“You are the one who attacked the palace, yet I sense… dark sorcery. Yes, I feel the presence of my old ally, Senator Binks,” the man mused as he stepped closer and began to pace around Kal. “Strange that he was able to cloud my mind for so long.”

“Transferring one’s essence is an ancient Sith practice,” the man continued. “Only a handful of Lords were ever able to master it, and even less were able to do it more than once.”

“Even more impressive is that my dark Gungan friend’s experiment has left an imprint on his former host,” the yellow-eyed man said. “You have become very powerful as a result of this.”

“If you know so much, then you’d know to be careful around me,” Kal replied.

“The Dark Side affords me much knowledge,” the man replied with a grin. “And much power!”

The old man suddenly waved his hand and Kal was instantly lifted off his feet and thrown several feet back to the ground.

Kal immediately jumped back up and pulled both his purple lightsaber and the orange one he had stashed earlier as he raced towards the cloaked man who revealed his own red saber. A quick, but fierce battle ensued as red, orange and purple lights danced across the dust and smoke still billowing from the area.

As he was about to land a potential deathblow, Kal’s lightsabers were simultaneously ripped from his hands and the cloaked man was able to surprise the Cypharian with a kick to the chest that knocked him to the ground.

Seeing one last opportunity to win, Kal willed a stone awning that the cloaked man was standing under to break apart and crash down. However, before the rubble could crush the man, the pieces began to levitate in mid-air and Kal turned to see the mysterious Ewok from before willing them to stay afloat.

He flung out his hand and forced the dark Ewok over a pile of smoking rubble and out of sight. He heard the stone pieces crash to the ground and looked back just in time to see the cloaked man standing in front of him, arms extended with glowing fingertips. Before Kal could move, the old man unleashed a hellish barrage of Force lightning that thrust the young Cypharian against the back wall where he endured the full brunt of the wielder’s anger.

“I have toyed with you long enough!”

As the cloaked man continued his assault, he walked towards Kal who writhed and screamed out in pain, but never begged for mercy, which seemed to agitate the old man as the moments passed.

“Shetai eleeo na goo,” the Ewok said as he walked over adjusting his universal translator. “He won’t break. His will is strong.”

The Force lightning subsided and the cloaked man turned away as Kal lay in a smoking heap on the ground.

“He has a connection to the Gungan,” the old man told the Ewok. “He has a psychic link to my old ally in addition to a rare ability to tap into the Dark Side. I have foreseen that this boy will hunt down the traitorous Gungan and bring him to me.”

“And what then?” asked the Ewok.

“The Gungan I will keep as a trophy,” the old man laughed. “The boy will have outlived his usefulness.”

The cloaked man began to walk away as the Ewok stepped over to Kal and nudged him awake.

Kal slowly began to move and managed to sit up as he leaned against the wall. He shivered as his body still reeled from the trauma.

“We’re off to find your Gungan friend,” the Ewok said as he nudged Kal again. “You’ve just been recruited into the Inquisitorius.”

“Is that right?” Kal asked.

“Well, Roolel,” Kal replied as he got to his feet, “I don’t think you’re gonna like how this ends.” 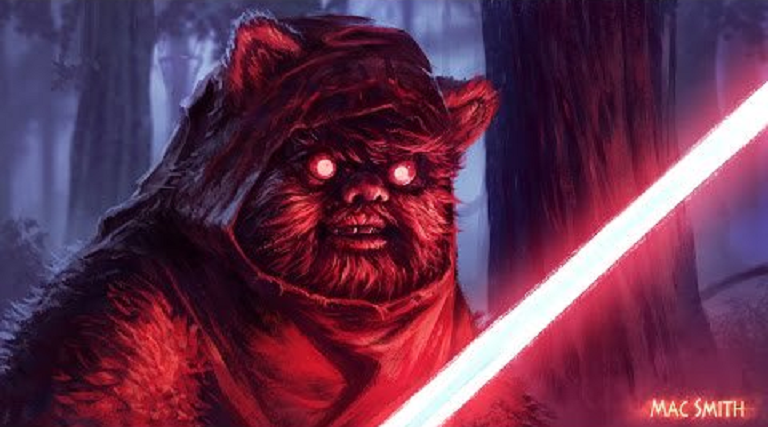