Well, it goes back to something I first noticed back on my second viewing of The Force Awakens a few years ago. I would not really come to the conclusion that Rey destroyed her parents at that time, but I did notice something that seemed too significant to ignore.

The sky has darkened to red, a color that signifies evil afoot in Star Wars

Compare with this scene on Starkiller Base. The sky is darkening as something evil is about to happen. 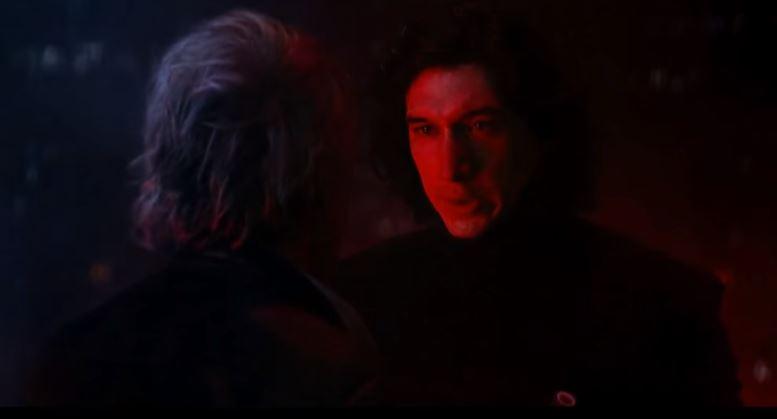 Kylo is bathed in red. This immediate change of light color precipitates his evil action.

This is immediately after the last scene. Where before Kylo Ren was uncertain, but still considering leaving with Han, he is now bathed in the evil red glow, and it signals his abrupt decision to kill Han Solo.

Now, at the time, I only noted that the darkening sky in Rey’s vision was a parallel to the darkening sky above Star Killer base. I knew it was intended to be significant, but I was unclear as to how. It could have meant nothing more in Rey’s vision than a foreshadowing of Kylo’s patricidal act, a blending of timelines. But why cast that dark red shadow on both scenes? A dark red shadow that is specifically intended to symbolize the dark side?

This is where the Last Jedi comes in, and where I started drawing my theory.

In the throne room of the recently deceased Snoke, Kylo Ren makes his famous plea to Rey to join him in creating a New Order. Desperate to get her on his side, to “let go of the past”, he encourages her to remember her parents, something that she has been actively repressing for years.

How did Rey’s parents die so young? Why? Why can’t Rey remember this?

Rey admits they were nobody. Kylo Ren, who so far has never been deceitful to Rey (and Rian Johnson the director backs this up), clarifies further her own memories that he saw back during their force bond in the hut. They were drunks, junk traders, who sold her for drinking money. Rey does not deny this and her face shows an unhappy acceptance.

But where it gets interesting is this: Kylo also says her parents are dead, buried in a pauper’s grave in the desert.

So Rey’s parents sold her off to Unkar Plunkett, but have also wound up dead on the planet.

Now many fans have thought this a discrepancy from what Rey’s vision in the Force Awakens showed us.

But I don’t think that it is, and I certainly did not think it was in the movie as I watched it.

It’s entirely possible that Rey’s vision of her parents leaving were a fabrication in her mind. After all, Rey is an unreliable narrator of her own life, and created the fiction of her parents coming back as a way to rationalize her abandonment and the notion her parents did not want her. If she believed her parents were “somebody”, a great Jedi hero, a warrior, she could fantasize that they HAD to leave her for heroic reasons, and thus it would mean she was loved, and they would come back.

However, I find the idea that her vision of the abandoning ship being a fabrication to be unlikely. The Force does not create deceitful visions.

Thus, Rey’s parents did leave her.

But how did they wind up dead in graves on Jakku? Why are we told this?

This is where the Force Awakens vision and red sky comes back into play.

Just as the darkening sky and red light immediately preceded the violent action of Kylo Ren killing his father–a sudden, impulsive act–this image of the same red light symbolizes a dark act immediately after the ship’s ascension into the sky.

That act is Rey, a child powerful in the Force, unintentionally killing her parents by bringing down their ship, in a naive attempt to bring them back to her.

This is why she remembers being abandoned, and why Kylo Ren has seen their graves in her mind. Rey’s parents never got to leave, and furthermore, she remembers them being dead. I can imagine that this would be such a traumatic act that she blocks it out, and over time creates her comforting myth that someday they’ll return for her, that she was never a bad girl who hurts people, a girl that gets abandoned for being bad.

Now, obviously, this is just a theory of mine, and some other folks on Reddit and Tumblr. But it’s cool to see others have arrived at the same minor theory on their own as well.

There’s no telling if it is remotely true until the 9th movie comes out December 2019, but if it is, it has some interesting implications for her character.

It becomes yet another parallel to Kylo Ren. These characters are both mirrors of one another in several ways–they feel abandoned by everyone around them, they are intensely lonely (even Rey, when surrounded by her new Resistance friends, comes off to me as standing a part from them), and possibly, they have both killed parents.

Ben Solo is a character that has been described as “coming from the light [eg, has good, heroic parents]” but is putting on the dark persona of Kylo Ren. Nonetheless, he is drawn to the light, both in himself, and in the person of Rey.

If Rey is a mirror of Ben Solo/Kylo Ren, we can surmise that she “comes from the dark” but wears a persona of light. She is drawn to the dark side, something that Luke Skywalker points out repeatedly. Of course, she is also drawn to the darkness of Kylo Ren/Ben Solo.

How is Rey “from the dark”? Possibly this references her parents being good-for-nothing drunks, happy to sell their child. Going with my theory, though, it could also be that the “dark” is her darkside powers that she used to kill her parents.

Again, as much as Kylo/Ben is dark and light, so is Rey, their approaches to it are simply reversed.

And it’s not talked about much, but Rey wears a mask as much as Kylo Ren wears his metal one. It’s simply that Rey’s mask takes on the form of her la-di-dah, Pollyanna unbridled optimism. It’s a shame that people feel Rey is a dull character, because in reality she is as complex as he is, and is also fighting conflicts within herself. Through the Force bond conversations with Kylo Ren, the Last Jedi film was showing us the growing cracks in her ever-happy facade.

If Rey has killed her parents, not only will it bring about further conflict within her character for the last film, it may help to shatter some of her Jedi-like self righteousness that she tends to have. Granted, killing your parents when you are 5 years old cannot be compared to a young man in his 20s killing his father, but she will realize how intense the darkness in her can be. So far she has chosen the Light side of things easily, but I envision her having a crisis of faith in the next movie.

Ultimately, whether this theory is just tinfoil over-analyzation or something that could actually be realized, I suspect that the next film will have both Kylo Ren/Ben Solo and Rey achieving balance of Light and Dark within themselves and between each other.

Side observation–one does wonder if Kylo Ren saw in Rey’s memory that she killed her parents and not just the graves on Jakku. If he did, it would mean he chose not to tell her, either hoping she remembers on her own, or not wanting to hurt her in that moment any more than she already is.

I could see the latter being a possibility–much of his suffering has been in the perception that people think he is a monster, and he is just stepping into the role he thinks everyone has driven him into.

While Kylo Ren certainly wants Rey to stop pining after her parents in the hopes that she’ll rely only on him and no one else (he is desperate not to be alone in this scene), he doesn’t exactly want her to become so utterly despondent to believe she is a monster incapable of being loved. Hence the “You’re nothing but not to me”, but no “And you’re a murderer just like me!”

Also, Unkar Plutt must know some shit, he’s the last guy aside from Rey to have seen her parents. I get that Rey hates Plutt and does not want to talk with him any more than she has to, but I wonder if she will ever consider asking him about that deal her parents made.

(This comprehensive theory was originally posted on Reddit: https://www.reddit.com/r/starwarsspeculation/comments/9vypi6/a_comprehensive_writeup_on_the_theory_that_rey/)