Rise of the Phoenix

Home Rise of the Phoenix

This story or parts thereof may not be reproduced in any form, stored in a retrieval system, or transmitted in any form by any means – electronic, mechanical, photocopy, recording or otherwise – without prior written permission of the author, except as provided by United States of America copyright law.

Star Wars characters, planets and vehicles are protected trademarks of Disney and Lucasfilm.

Rise of the Phoenix

The clone slowly, painfully stretched out his hand and wrapped his fingers around the hilt of his Songsteel sword that was soaking in the same pool of blood as he was. He knew he shouldn’t be alive, but something was willing his heart to beat.

When the black mist overtook him in the courtyard above he witnessed the fight with Palo through his own eyes, yet was unable to do anything but watch. He felt the pain of the Force lightning as it fried his body and endured the beating from the MagnaGuards. He could still hear the voice of the Sith Lord who possessed him echoing in his head. He remembered Palo’s betrayal and his eyes began to burn red with fury.

The droid warehouse was empty as Fortem struggled to his feet using his sword to prop himself up. The MagnaGuards were gone. Palo was nowhere to be seen. He had been left for dead. A discarded experiment. A broken weapon. A used pawn. Alone. Hatred began to build inside him and it fueled his ability to move his fractured body forward.

As he began to walk, a familiar voice called out to him. “Your hate sustains you.”

Fortem stopped and rested against the wall for support. “I know your voice.”

“You had potential,” the voice continued. “A rare thing to be fused with a Force crystal.”

“I was a weapon,” Fortem lamented. “That you destroyed.”

“No!” The voice yelled out. “Palo destroyed your body. I tried to help you stop him.”

“You said you wanted to rule the galaxy, that’s why you did this,” Fortem remarked.

“Do not fault me for lofty initiatives,” the voice replied. “The first step towards ultimate power was wiping Palo from the galaxy. Something I’m sure you would’ve appreciated.”

“What about Palpatine?” The clone asked. “Palo told me that he foresaw the Emperor as the obstacle to power. He never mentioned you.”

“The problem with foreseeing the future is that the person may forget to remember the past,” the voice said. “Palpatine is not the true Emperor. He is powerful, but the galaxy has only ever had one true Sith Emperor.”

“And who’s that?” Fortem asked turning towards the voice as a blue apparition suddenly appeared.

“The immortal lord of the Eternal Empire,” the voice replied. “Call me Valkorion.” 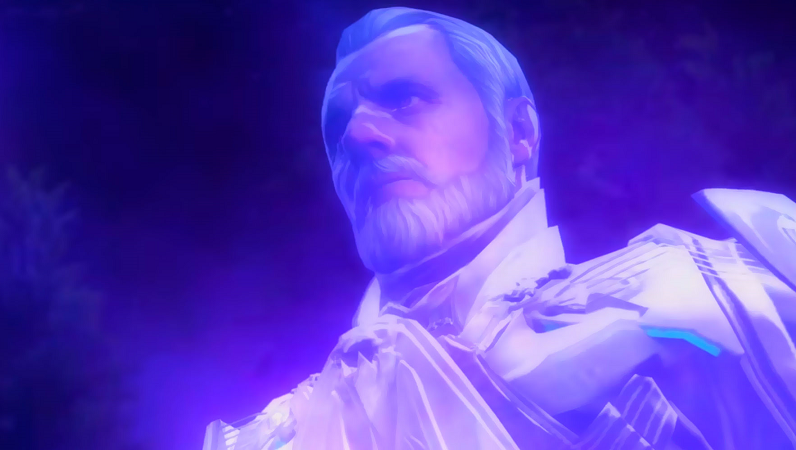